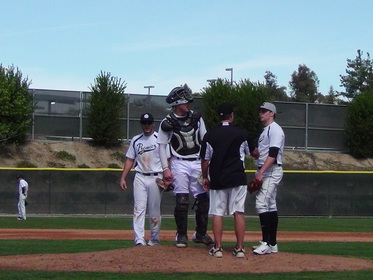 Jake Pulcheon is a 6'3" 213 lb. catcher who is the captain on the ABCL D1 So Cal Premier. Opening weekend was a success for the high school senior, going 6 for 11 with 1 2B, 4 BB, 1 SCB and scoring 3 R. He's a very tough out at the plate, with good pitch recognition, and plate discipline. The umpires love this kid, and he's every coaches dream player, a leader on and off the field. His strong arm, mentality of the game and top defensive skills allow him to play anywhere on the diamond. This is his second season with the Premier team, which is loaded with talent and coached by Rob Vasquez.

Keoni Mortenson is a 6'1" 2014 outfielder who steals his fair share of bases and swings the bat with the best of them. Mortenson picked up 6 H on the weekend with 2 SB and 3 RBI. Great speed on the bases and the power in his bat are both very attractive.

Austin Vasquez is a junior and attends Murrieta Valley H.S. He is a SS with a great attitude who can play anywhere on the field, including 1B. A solid glove, quick feet and strong arm give him all the tools he needs to move from infield to outfield with success. Line drive gap to gap hitter, with real good plate discipline, who gets down the line very quick. Vasquez had 3 SB on the weekend, after successfully working the count and taking 4 BB, 1 HBP, and racking up 4 H.

Saturday's double header was played at the historic Jay Littleton Field in Ontario. Premier went 2-0 against the CBA Bulldogs who is sporting several Red Shirt college players and the Preseason Player of the Year, Caleb Valentine (Compton College) -3B. Pulcheon went 3 for 6 with 2 BB, 1 SCB and 2 R. Vasquez went 4 for 8 with 1 BB, 1 HBP, 2 SB, 2 R. Andrew Frank went 4 for 9 with 4 RBI. Millerd picked up 2 2B, 2 BB, 2 R, AND 3 RBI.