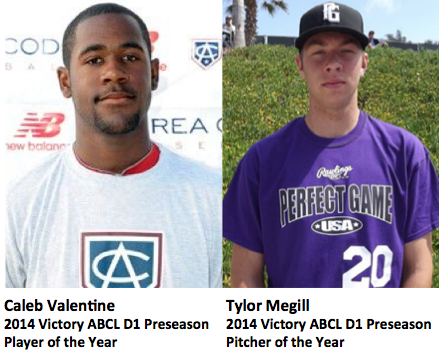 With plenty of Perfect Game High Follows, Area Code Games participants, and prospected draft picks, the 2014 Victory ABCL D1 Spring League looks to be as competitive as ever. Below is the 2014 Victory Custom Athletic ABCL D1 Preseason All-Conference Team, which was voted upon by the ABCL Coaches and Staff.

2014 D1 Preseason Player/Pitcher of the Year

Caleb Valentine is an athletic 6-2, 190lb infielder/outfielder who plays well at both spots. With a 6.79 - 60 yard dash and plus bat speed at the plate, he is a force to be reckoned with offensively. Short and quick to the ball, he gets good lift for some gap power. As a third baseman, he's slick fielder with a plus arm across the diamond. With definite D1 tools, he should be draftable after another year of college development.