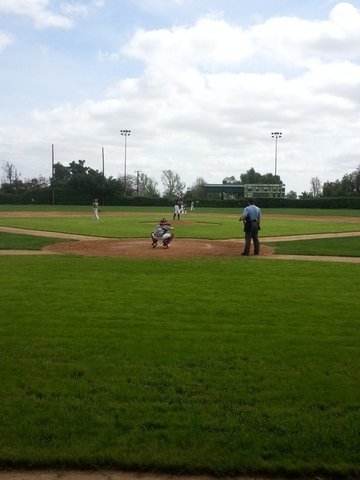 Jay Littleton Ballpark Sunday 3/13: The ABCL spotlight doubleheader of the weekend takes us to Jay Littleton Ballpark in Ontario for a D2 battle. The match-up between So Cal Bombers and Impact Player Baseball was a competitive and entertaining one. See below for the recap of the day's action.

Game 1: The first game was highlighted by a dominant performance on the mound by IPB's #54 LHP Julian Berinti. Berinti shined as he consistently dominated the strike zone with a two pitch mix. Aided by solid defense and early run support; the young southpaw pitched into the 4th inning allowing only a single base runner (3rd inning 2 out walk). The Bombers broke up the no hit bid with a 1 out single up the middle in the bottom of the 4th. Berinti, seemingly un-phased by the knock, retired the next two batters rather easily to keep the scoreless start in tact. Berinti would go on to pitch a scoreless 5th as well for a final line of: 5 IP, 0 R, 2 H, 1 BB, 6 K's. Leading 4-0 heading to the bottom of the 6th, IPB handed the reins over to another lefty #44 Tyler Vitelli. Vitelli struggled with command early and left the game after 1/3 of an inning after surrendering a hit and walking three. With one run across the plate and the bases loaded IPB turned to #0 RHP Jayden Gallardo. Gallardo, up for the task came in the pressure spot and struck out the first batter he faced. After a wild pitch allowed a run to score (charged to Vitelli) and the tying run to move up to 2nd base Gallardo scuffled and walked one before ending the inning with another strike out with the bases loaded. Gallardo proved nerves were not a problem for him as he struck out 2 of the 3 batters he faced with the tying and go ahead runs on base. Leading 4-2 IPB went quietly in the top half of the 7th and the game again landed on the right arm of Jayden Gallardo. Gallardo showed grit overcoming a lead off single and an error in the bottom of the frame by striking out another hitter with the tying run on 1st and inducing a hump-back line drive out to shortstop to end the game. Gallardo ended up striking out 3 and earning the save in his 1 2/3 innings of work while securing Tyler Berinti and IPB a well deserved win in the opening game of Sunday's action.

Game 2: Similar to the first game of the day, game 2 was also a very solid and competitive match-up. Fundamental baseball, great pitching and timely hitting was the recipe to a win in this tight battle. Breaking a scoreless tie early, IPB scored 2 in the bottom of the first. Taking advantage of a lead-off walk and a costly error by the Bombers, #44 Tyler Vitelli came up with 2 outs and runners on 2nd and 3rd and promptly singled in both runs to give IPB the early lead. This allowed #99 RHP Jake Massey to settle in after a rocky 1st where he walked 2 batters. Massey used the lead to begin pitching to contact and turn in a solid outing of 4 IP, 1 R, 1 H, 3 BB's, and 4 K's. Taking a 2-1 lead into the top of the 5th IPB handed the ball to #26 RHP Sebastian Guzman (2021 grad). The young Guzman was up to the challenge as he struck out the first batter he faced in the 5th on his way to a 1-2-3 inning. IPB added an extremely important insurance run in the bottom half of the 5th when #21 SS Shaun McHale doubled in a run with 2-outs. After working around a 1 out double, reliever Sebastian Guzman retired the next two hitters of the 6th and entered the 7th still clinging to the 3-1 lead. As the Bomber did in game one as well as in the 6th inning of this game they brought the tying run to the plate after a lead-off single to create a pressure filled finish. Guzman and IPB were up to the task yet again as a come-backer, fly out to right, and then a strike out ended the threat and the game. Massey earned the win and Guzman the save. Clutch 2-out hitting by Vitelli and McHale made the difference as IPB played a clean double header and earned the sweep, only committing 1 error and allowing 3 runs in the 14 innings of work.